This is a virtual seminar; link will be made available by email. 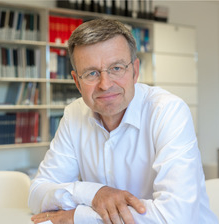 The discovery that non-coding RNA molecules are critical regulators of gene expression in humans and many other organisms has changed the traditional protein-biased focus on CV disease mechanisms. Only recently have analyses revealed that more than 70% of our transcribed genes are non-coding; protein-coding genes, by contrast, make up only 2% of the genome. At least 30,000 ncRNAs – of which many may have regulatory functions – have been detected in humans. The Engelhardt team has assembled strong expertise in the experimental manipulation and the identification and modelling of disease-associated ncRNAs. Stefan Engelhardt and colleagues developed the first antimiR-based therapy in myocardium and since then, he continues to resolve the function of ncRNAs in the mammalian heart. Stefan Engelhardt will speak about his key findings in this research area with an emphasis on most recent  and unpublished findings from his laboratory.